“The truth is, Sen. Joe Manchin hasn’t supported the President’s agenda, and I don’t know about the rest of you, but I think West Virginia deserves better.”

“I think we could use a conservative fighter, like Patrick Morrisey, in Washington, D.C.”

WHEELING, WV — Today, at an event in Wheeling, WV this afternoon, Vice President Mike Pence criticized Sen. Joe Manchin’s record of siding with liberal obstructionists and for opposing the Trump-Pence agenda. Vice President Pence also made a point to praise Attorney General Patrick Morrisey’s record of fighting for West Virginia coal jobs and for being an ally of President Trump. 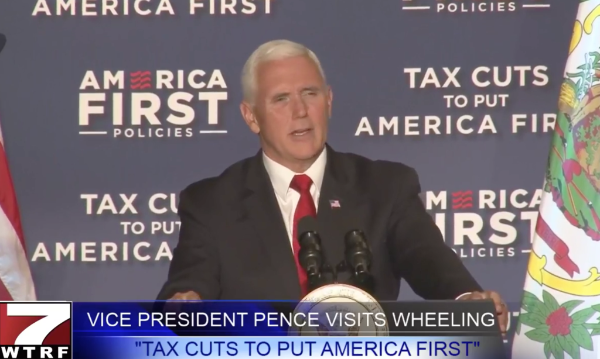 That’s a pretty long list. When it came to that wall we were just talking about a minute ago to secure the southern border, Senator Joe Manchin actually told the people of West Virginia, “I’m not voting for the wall, either.” You know, President Trump was right when he said West Virginia isn’t getting any help right now with Joe Manchin because, as the President said, he just about votes against everything…

VP PENCE ON ATTORNEY GENERAL MORRISEY:  I’m here to tell you with the unwavering support of West Virginia’s great Attorney General, Patrick Morrisey, and I want to thank you General.

And your Attorney General has been standing shoulder to shoulder with our President to crack down on sanctuary cities and he’s a tireless champion of all the God-given liberties enshrined in our Constitution, including the Second Amendment and the Bill of Rights. He’s a proven leader, he’s dedicated to fighting for conservative policies and principles and I don’t know about the rest of you, but I think we could use a conservative fighter, like Patrick Morrisey, in Washington, D.C.